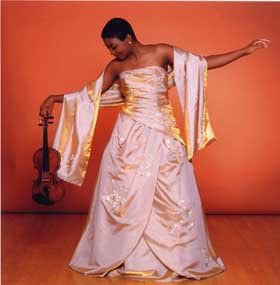 From a UW press release:
An internationally known violinist who made her stage debut with the Chicago Symphony at age 9, Tai Murray will close the University of Wyoming Cultural Programs’ fall concert series with a 7:30 p.m. performance Friday, Nov. 21, inside the Fine Arts Center concert hall in Laramie.
Tickets cost $18 for adults and $15 for students and senior citizens. Tickets are available by calling the Fine Arts Center box office at (307) 766-6666 or at the Web site www.uwyo.edu/finearts.
“We try to feature not only well-known artists, but also performers who are just beginning their careers, although Ms. Murray, now merely 26, could already be considered a veteran,” says UW Cultural Programs Director Cedric Reverand. “She’s clearly blossoming into a fine player, already established on the international scene, with a great career ahead of her. We’re pleased to be able to introduce her to our audiences.”
Over the past few years, Murray has emerged as a popular concert soloist and chamber artist, performing on such stages as Berlin’s Konzerthaus, Chicago’s Orchestra Hall, Copenhagen’s Tivoli Gardens and New York’s Carnegie Hall. Recently, Murray was chosen as a BBC Radio 3 New Generation Artist, an annual program designed to mentor and launch the careers of promising young artists.
For ticket information, call the Fine Arts Center box office at (307) 766-6666 or go to www.uwyo.edu/finearts on the Internet.
Sort By Category By Month By Year
Cancel