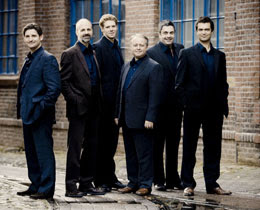 The University of Wyoming fall Cultural Programs’ concert series continues with The King’s Singers, an a cappella ensemble, Friday, Oct. 23, at 7:30 p.m. This concert is being cosponsored by Laramie’s Hilton Garden Inn.
Tickets for the performance, in the Fine Arts Center concert hall, cost $28 for the public and $24 for students and senior citizens. Tickets are available by calling the Fine Arts Center box office at (307) 766-6666 or at the Web site www.uwyo.edu/finearts.
“The King’s Singers have an incredible, rich, ringing sound, achieved, in part, because of the configuration,” says UW Cultural Programs Director Cedric Reverand. “Not bass, baritone and two tenors, but bass, baritones, tenor and countertenors.”
Founded in King’s College, Cambridge, in 1968, The King’s Singers have released more than 80 CDs, 200 commissioned works and perform more than 120 international performances each year.
“Even though they’ve gone through several generations, they still sound like the King’s Singers,” says Reverand. “And they have an elegance and charm that seems to go along with that British accent.”
To learn more about The King’s Singers, visit their official Web page at www.kingssingers.com.
The fall concert series continues with Rebel (Nov. 13), a baroque ensemble, and concludes with Lisa De La Salle (Nov. 20), a pianist who will perform with the Boston Symphony before coming to Laramie.
Sort By Category By Month By Year
Cancel