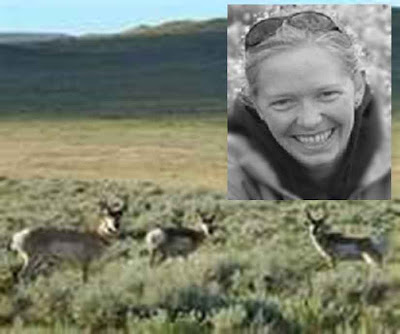 University of Wyoming graduate student Emilene Ostlind of Big Horn is the recipient of a fellowship award that will allow her to conduct research work in Grand Teton National Park.
Ostlind, pursuing a master of fine arts degree in creative writing and environment and natural resources at UW, is just the fourth recipient of the Boyd Evison Graduate Fellowship. She says she will use her fellowship award to produce a series of nonfiction essays about the pronghorn antelope herd that summers in Grand Teton National Park and winters in the Upper Green River Basin. The effort will promote designation of a national migration corridor for the herd’s protection.

The fellowship encourages scientific and conservation-related research in national parks for highly motivated graduate students to conduct research within Grand Teton National Park and the greater Yellowstone area. It also supports study leading to a master’s or Ph.D. degree in the biosciences, geosciences or social sciences.

“While scientific studies, resource management planning and even political lobbying play crucial roles in the conservation of habitat and wild places, I would propose that creative arts most strongly influence public attitudes about how to prioritize land use,” Ostlind says. “Throughout the history of American conservation, each landmark event or movement has been preceded by literature that compelled general audiences and connected them to landscapes, flora, fauna and the ecosystem elements — often those in imminent danger.”

As part of her project, Ostlind plans to hike the length of the pronghorn migration path from the Red Desert south of Pinedale to Grand Teton National Park. She also will spend the summer interacting with scientists and conservationist groups that are trying to bring attention to the pronghorn migratory path and the establishment of a national migration corridor.