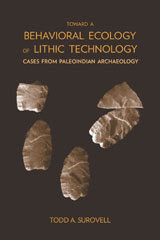 Modern humans and their hominid ancestors relied on chipped-stone technology for more than two million years and colonized more than 99 percent of the Earth’s habitable land. Yet there currently exist only a handful of informal models to explain variability in archaeological lithic (stone) assemblages.
Because the fundamental processes of making, using and discarding stone tools are at root exercises in problem solving, Todd Surovell, assistant professor in the University of Wyoming Department of Anthropology, asks what conditions favor certain technological solutions.

He addresses those questions theoretically in formal mathematical modeling in his recently published book (see above), “Toward a Behavioral Ecology of Lithic Technology: Cases from Paleoindian Archaeology,” published by University of Arizona Press.

Surovell constructs a series of models designed to link environmental variability to human decision making as it pertains to lithic technology. To test the models, Surovell uses data from the analysis of more than 40,000 artifacts from five Rocky Mountain and Northern Plains Folsom and Goshen complex archaeological sites. The primary result is the production of powerful new analytical tools useful in interpreting archaeological assemblages.
In his 280-page book, Surovell promotes modeling and explores the general issues governing technological decisions. His models can be applied to any context in which stone tools are made and used.

For more information, contact Surovell at (307) 766-3239 or e-mail surovell@uwyo.edu.
Sort By Category By Month By Year
Cancel