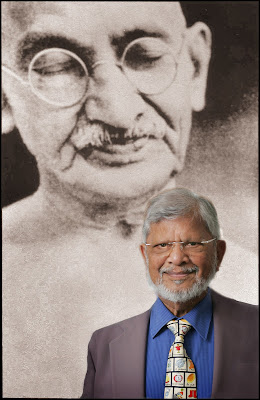 The grandson of Mahatma Gandhi, Arun Gandhi, peace activist and proponent of nonviolence, will speak at the University of Wyoming Tuesday, Nov. 16, as part of the UW Social Justice Research Center’s semester speaker series.

His free public lecture, “Lessons Learned from My Grandfather: Non-violence in a Violent World,” — offering firsthand insights into one of history’s most influential leaders — is from 4-5:30 p.m. in the Fine Arts main stage.
“We are excited to have Mr. Gandhi here at the University of Wyoming. At a time of such contentious societal dialogue around the war in Afghanistan, immigration reform and restrictions, and even the meaning of social justice, a voice of peace and civility is much needed,” says Francisco Rios, UW Social Justice Research Center director and head of the Department of Educational Studies.

Few names in world history evoke such powerful images of integrity, courage, social harmony and — perhaps most of all — hope, than Gandhi. Arun Gandhi carries within himself the same guiding principles as his grandfather, the legendary peace-maker and spiritual leader.

Growing up in apartheid South Africa as a person of Indian heritage meant racial confrontations with both blacks and whites. Filled with rage and plotting to avenge his beatings, Arun Gandhi subscribed to Charles Atlas’ bodybuilding magazines so he would have the strength to fight back. When his parents discovered the reason for their 12-year-old son’s sudden fascination with exercise, they decided that a visit to his grandfather in India was in order.

What followed was an 18-month stay with one of the world’s great leaders that would give him the keys to the powerful philosophy of nonviolence and help shape the foundation for his life’s work.

After leading successful projects for economic and social reform in India, Arun Gandhi came to the United States in 1987 to complete research for a comparative study on racism in America. In 1991, Gandhi and his late wife, Sunanda, founded the M.K. Gandhi Institute for Nonviolence, now headquartered at the University of Rochester, N.Y. The institute promotes nonviolence through workshops, lectures and community outreach programs.

Photo: Arun Gandhi, grandson of Mahatma Gandhi, will discuss “Lessons Learned from My Grandfather: Non-violence in a Violent World,” from 4-5:30 p.m. Nov. 16, in the Fine Arts main stage.