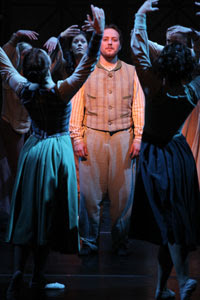 The University of Wyoming’s original production as “Six Songs from Ellis” has been selected as on of the four Region VII finalists for the 2010 Kennedy Center American College Theatre Festival.
Conceived and choreographed by professor Marsha Knight, it is an original work that uses dance, film, and audio interviews and actors reenactments to capture the voices of immigrants who represents a different stage of the immigration experience, and efforts were made to preserve the stories as originally told.
“Six Songs from Ellis’ showcases many aspects of our program,” says Knight. “We appreciate the opportunity to take this on, as it provides another occasion to work the piece and improve.”
It was chosen as one of four regional finalists from a pool of approximately 50 productions. The Center’s annual competition for student actors, directors and playwrights representing colleges and universities nationwide, will be Feb. 15-19 at the University of Nevada-Reno.
Two UW student playwrights have also been selected as finalists. They are Jaime Cruz of Laramie for “Cuarto # Cuatro” and Christopher Wolter of Denver, for “Veiled Inspiration”
A special public peformance of “Six Songs from Ellis” is tentatively scheduled. Proceeds will be used to offset costs of attending the regional festival.
When: 7:30 p.m. JAN. 29
Where: UW Arts and Sciences auditorium
Sort By Category By Month By Year
Cancel