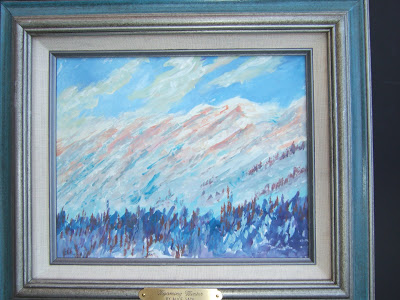 The West Nebraska Arts Center, 106 E. 18th St., Scottsbluff, Nebraska, is featuring a retrospective of the work of Alice Warfield Sack Aug. 1-29. An opening reception will be held from 6-8 p.m. on Friday, Aug. 1.

Sack died two years ago in Torrington at the age of 95. Much of her work features Wyoming landmarks, such as Devils Tower, the Tetons, and the Snowy Range. She was born in San Francisco and spent her early years on the Pacific Coast before moving to Denver in the 1940s. She spent her later years in Torrington, Wyo., and Scottsbluff.

According to a press release, Sack’s work was featured in the Art Center’s first one-person exhibit. She was a member of the North Platte Valley Artists’ Guild and the Wyoming Arts Association. She showed her work throughout Wyoming, Colorado, Utah and Nebraska, but also exhibited in New York City, Maine, and Massachusetts. She received more than 100 awards during the course of her long career.

According to long-time friend Amy Sadle in Gering, Neb., Alice Sack died with no dependents. So, all of the work in the exhibit is for sale. Profits will be used to provide scholarships for artists over 40 years old. CDs of the work are available by calling 308-632-2226.