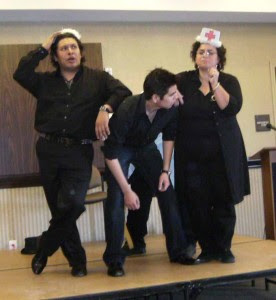 Jenny Ingram wrote the following Aug. 6 post for the Wyoming Humanities Council blog. It talks about a program co-sponsored by the WHC and the WAC. Both orgs have grants for this type of program — and a variety of others.

Both the Wyoming Humanities Council and the Wyoming Arts Council sponsored a March presentation of The Cancer Monologues by Denver’s El Centro Su Teatro. The play, hosted in Laramie by La Radio Montañesa KOCA 93.5 FM, explores the social and cultural issues of cancer within the Latino community. Su Teatro originally created The Cancer Monologues in partnership with the Latino Research and Policy Center at the University of Colorado, Denver, and it’s now on their roster of touring shows. (Other offerings include a seatbelt safety awareness play starring two Mexican masked wrestlers, and a play about the United Farm Workers march from Delano to Sacramento in 1966.)

I went with limited expectations. How interesting can a public service cancer play be? Let me tell you: I’m now a season ticket holder to El Centro Su Teatro! They are fresh, they are funny, and in the best tradition of theater, they are political. (They’re also a bargain.)

Before the performance of The Cancer Monologues began, Cecelia Aragon, a UW faculty member in theater and in Chicano studies, presented a short history of Chicano theater. She explained how the tradition (and Su Teatro) started in the late 1960s and early 1970s with the aim of highlighting social and political issues in the Hispanic community. I love this era for its activism, and I’m always excited to encounter people and organizations from this time period who have retained their liveliness. Thank you, Su Teatro, for keeping it real!