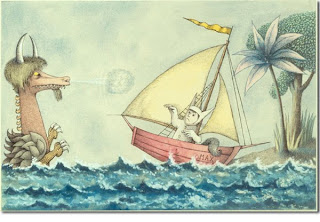 From common pets to mythical beasts, nearly all of the 108 books illustrated by Maurice Sendak include animals of some kind. Drawn from the Rosenbach Museum and Library’s collection of original Sendak material, this exhibition showcases wild things alongside their more domestic counterparts. Sendak’s veritable bestiary ranges from dogs, farm animals, and well-behaved bears to the famous Wild Things and their untamed brethren. The 30 original illustrations show the range of styles with which Sendak captures the textures of fur, feathers, and scales, such as his precise pen and ink drawings for The Bat-Poet and the soft watercolors of Mr. Rabbit and the Lovely Present. Visitors can glimpse Sendak’s sketch of lions at the Central Park Zoo from the 1950s and read an early draft of Where the Wild Things Are in which a wolfish Max commands, “Show me wild new ways.” This exhibition was organized by the Rosenbach Museum & Library in Philadelphia and will be on view at the National Museum of Wildlife Art from May 15 to September 19, 2010.
National Museum of Wildlife Art
2820 Rungius Road
Jackson Hole, Wyoming 83002
800-313-9553
307-733-5771
Sort By Category By Month By Year
Cancel