Year in Review: Public art projects blossomed throughout the state in 2011

It was a big year for public art projects in . Wyomingarts reported on a number of them across the state but still missed a few. The best-known one probably was the environmental-themed artwork at UW by British land artist Chris Drury. Carbon Sink: What Goes Around, Comes Around was installed by the artist in July. The event was filmed by a UWTV and is available on the Art Museum’s webpage and YouTube page. “Carbon Sink” has become a big tourist draw, when it isn’t covered by snow.

In , internationally renowned landscape architect Walter Hood (shown in photo) was brought in to design the new sculpture trail for the National Museum of Wildlife Art. Known for his innovative and people-friendly designs of such high-profile public spaces as the grounds for the De Young Museum in San Francisco’s Golden Gate Park, Hood conducted a public presentation in July to share insights into his philosophy about creating multitasking public spaces that are both respectful of the land and rooted in their communities. The Wyoming Arts Council staff and board visited the sculpture trail in November as part of its quarterly board meeting in . Some of the artwork will be installed this summer, with others being added to the trail as they’re completed.

Murals were big in 2011. Big murals were even bigger. Cheyenne downtown developer Ed Murray commissioned a multi-story mural of a cherub. Influences for the mural range from Italian Renaissance artwork to the cherubs that were popular in Wild West saloons. The mural was painted by Tennessee muralist Michael Cooper. Video of the dedication ceremony was filmed by Alan O’Hashi. 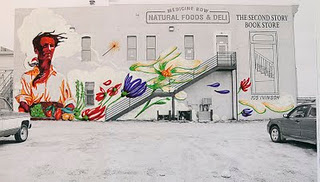 A series of three murals cropped up in . One of them was actually about crops, the people who grow and harvest them, to be exact.  artist Talal Cockar’s “Tierra y Libertad” (pictured above) was the first of this mural series and was sponsored by the University of Wyoming Art Museum and the

, Cockar’s mural recognizes natural foods and agriculture and is a tribute to the land and the people who work it. The Laramie Mural Project is an extension of the Art Museum’s “Sculpture: A Wyoming Invitational” exhibition of public art that opened in 2008. Cockar has studied and created street art using different media for more than 10 years and has done work in various social and cultural settings all over the world.

The Wyoming Arts Council’s State’s Art in Public Buildings “1 percent for Art” program really took off in 2011. Three bronze pieces by part-time Lander artist David R. Nelson were dedicated at the new welcome center along I-90 near Hulett. The new Military Readiness Command Center and Wyoming Game & Fish buildings all have new artwork, both outside and inside. The new welcome center on I-25 south of Cheyenne will have some outdoor sculpture along with its unique architecture — the artist has been selected from a field of eight and the selection will be announced early in 2012. More projects are expected in the new year. The program allows 1 percent of the construction costs of any new, state-funded construction projects, up to a maximum of $100,000, to be spent on art work for those facilities.

Speaking of welcome centers…. Jackson’s new tourist info center — Home Ranch — will feature a new artwork by John Frechette. The installation includes two exterior walls of glass tiles made by Frechette, who works out of Factory Studios run by the Teton ArtLab. The pair of installations represent grizzly bear and bison DNA. This is just one of the innovative projects undertaken by the Jackson Hole Public Art Initiative. Others include The Poetry Box (also built by Frechette), located in the Valley Bookstore, and fanciful bike racks located throughout town and out at the National Museum of Wildlife Art. Here’s how the JH Public Art Initiative describes itself: “As a result of our efforts the value of public art as a cultural tourism driver and creative placemaking tool has been recognized by our elected officials. Public art is part of the Managed Growth section of the Teton County Comprehensive Plan. Public art will be integrated into public spaces adding character and highlighting our shared values. Thank you to all our elected officials and planning departments for their diligent work on the new plan. Grant received this year:  Wyoming Cultural Trust Fund for supporting our efforts to develop guidelines for public art in the Town of and . Award: $10,060. 1% for the Tetons and members are supporting our initiative to install art about the environment on the Community Pathways system. Award: $9,635. The Wyoming Arts Council is providing support for the Cultural Diversity Mural and Town as Heart Projects. Award: $6,200.” 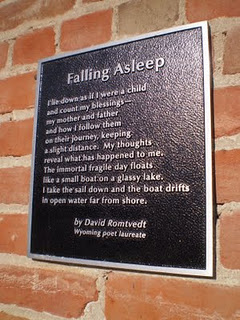 has a unique public art program. The “Walkabout Gallery” is co-sponsored by the Buffalo Downtown Association and the Johnson County Arts & Humanities Council. Vikki Chenette, vice president of the JCAHC, says that the “Walkabout Gallery” is a bit different than most traditional public art projects. “We think that people will be surprised and delighted to find these little things” around town, she said. One of those is David Romtvedt’s poem “Falling Asleep,” affixed to the brick wall outside of his wife Margo Brown’s pottery shop. David, who recently stepped down from his position as Wyoming Poet Laureate, told the Buffalo Bulletin that “it is neat to see it where people wouldn’t necessarily go hunting for poems.”

Casper is incorporating a public art space into the construction of a new low-income housing development across from the Nicolaysen Art Museum near downtown. Casper developer Steve Grimshaw says that he just wants to be a “responsible builder.” To that end, he hired contractor Pete Peterson to recycle whatever he could from the old KC Apartments that were being demolished to make way for the new Sunshine Apartments near downtown. Peterson was able to recycle 83 percent of the building. That included concrete that was crushed to go into the foundations of the new building. Also claw-foot bathtubs, cabinets, door locks and faucet handles. Also salvaged were old cement slabs (shown above) stamped with the date “1917” that will pave the new public arts space that is part of the project. A coalition of Casper organizations recently received a National Endowment for the Arts grant for the arts space. Read entire article at http://trib.com/news/local/casper/developer-recycles-notorious-casper-apartment/article_e504182e-4cd8-55b8-bf54-6d72b0b292a1.html#ixzz1h5EsEb00