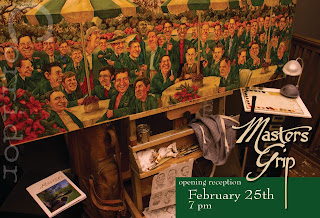 News from Reed Merschat at the Corridor Gallery:

The Corridor Gallery in downtown Casper announces the completion and debut showing of the “Masters Grip,” a painting by Casper artist resident and gallery co-owner Zachary Pullen. On Friday, Feb. 25, Masters Grip will available for viewing to the public for the first time ever. As well as the final painting, the show will also include the work leading up to the final canvas, including all preliminary sketches and layout pencil drawings to completion. Zak is off to the annual Masters Tournament hospitality venue in Augusta, Georgia, this April to announce the unveiling of his latest creation. The painting contains 75 years of history depicting those that helped write it. The public and press are invited to join Zak at the Corridor Gallery for Masters Grip world debut right here in Casper, Wyoming.

Four years ago, professional illustrator and avid golfer Zachary Pullen conceived and began creating Masters Grip. Inspiration for this painting came through a story told of Tiger Woods and Byron Nelson comparing their grips during a champion’s dinner. In 2011, Zachary is happy to announce the completion of a painting culminating his passions into one 72” x 24” canvas. At the center of the painting, seated at a table in the foreground of Amen Corner, a vibrant and expressive Robert Trent Jones, Jr., leads Zak’s rendition of the beautiful Augusta National Golf Course. Around Robert, Zak meticulously integrated the caricature portraits of all 45 professional golfers to date sharing the honor of winning the famed “green jacket.” Zak, a professional illustrator for 16 years, has found success with many illustrations and paintings published in such periodicals as Golf World, Sports Illustrated, New York Times Book Review, Esquire, Penthouse, National Geographic Society and many others. In addition to periodicals, Zak’s work has been the content of multiple picture books published by Simon and Schuster, Penguin Putnam and Sleeping Bear Press. Zak has also earned notoriety by his acceptance into The Society of Illustrators and the Communication Arts best in contemporary illustration annual. Masters Grip is a project born for the love of the game. “I’m thrilled to be releasing a new work of art based upon my passions for the culture, personality and history of golf” Zak states.