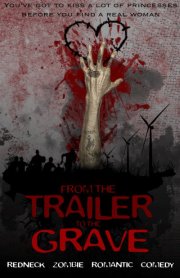 From a press release:
If you missed the and showings of the short film “Undead Lovers,” you will soon have a chance to view it online. The film is being entered in the Wyoming Short Film Contest and along with other films will be viewable on their website: www.wyomingshortfilmcontest.com. The short, filmed in and Medicine Bow features Jalan Crossland’s song of the same title and stars talent. Thanks to the success of fundraising campaigns on Kickstarter and IndieGoGo, “Undead Lovers” has been a smash at the Cheyenne Zombie Fest, Ft, Collins Zombie Crawl, Flic Boulder, Might & Fright Fest at the Long Beach Comic & Horror Con, and Shockfest/Mockfest at Raleigh Studios in .
The short is part of the larger, full-length film project “From the Trailer to the Grave.”
“The success of the short has created great interest and we can now start firming up plans for the full-length film,” stated Executive Producer K. Harrison Sweeney.
A graduate of the , Sweeney was recently awarded an Individual Artists’ Professional Development grant by the Wyoming Arts Council for the project.
“The goal is to shoot the film mostly in and we are looking for Wyomingites to be part of the film,” continued Sweeney.
The principles of the movie have already been cast and you may have recently seen some of the stars in their current projects: Brad Carter was just in “House”; Lindsay Goranson’s “Theatre Bizarre” horror anthology opened in theaters in January; Mark Fite co-starred with Oscar winner Marion Cotillard in “L.A.dy Dior;” Ken Campbell brought the cast of Fox’s “Herman’s Head” back together for the spoof “Herman Cain’s Head” which soared through the roof as Funny on the website “Funny Or Die;” Jim Turner appeared on an episode of “The Big Bang Theory” in January; Sean Cook shot an episode of “Grimm” in Portland, Paul Schweiggert makes his big screen debut in Disney’s “Big Miracle;” Missy Moore is still making headlines in the Denver theatre scene; and local Casper actresses Pat Pulitzer and Dawn Anderson are rehearsing for Stage III productions. K. Harrison Sweeney has also been busy and will be making his big screen debut in several one-on-one scenes with Eddie Murphy in Paramount Pictures’ “A Thousand Words” coming out in April.
Although the principles have been cast, locals need not despair. According to Sweeney several supporting roles will be open to Wyomingites. Auditions in , , and will be held during Valentine’s Day week. Most of the roles that are available will be for zombies and people who turn into zombies.
“We are looking for people from all walks of life – oil tycoons, teachers, children, roller derby dames, politicians; all are encouraged to try out,” continued Sweeney.
Auditions in will be held on Sunday, February 12, at the Wagon Wheel Roller Skating Rink at There will be a workshop on “Zombie Behavior & Movement” from 10 a.m. to 10:30 a.m. Auditions will then be held from 10:30 a.m. to noon.
We’ll start the workshop from 3-3:30 p.m at the Atlas Theatre on Wednesday, February 15. Latecomers will not be admitted. Auditions will commence immediately thereafter from 3:30-5 p.m. Latecomers will not be admitted.
The workshop on Sunday, Feb. 19, will go from 5-5:30 p.m. at the of ‘s auditorium. Latecomers will not be admitted. Auditions will commence immediately thereafter from 5:30-8 p.m. Latecomers will not be admitted.
“Nothing need be prepared, but latecomers to either event will not be admitted, so show up early,” stated Sweeney. Producers will be taking their own pictures and screen testing with cold readings. While not everybody will be needed for the entirety of the film’s shoot, anybody planning on attending should be prepared to fill out their availability for the last three weeks of September and the first week of October.
More information can be found at www.fromthetrailertothegrave.com
Sort By Category By Month By Year
Cancel