Activist and author Greg Mortenson to speak in Cheyenne March 29 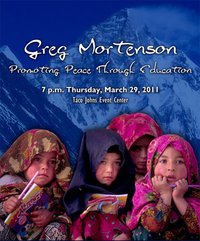 Two-time Nobel Prize nominee Greg Mortenson will share insightful commentary and stunning photography to educate and promote awareness of the importance of primary education, literacy and cross-cultural understanding about the remote regions of Pakistan and Afghanistan.

Greg Mortenson promotes peace through education. He is the co-founder of nonprofit Central Asia Institute www.ikat.org, founder of Pennies For Peace www.penniesforpeace.org, and co-author of New York Times bestseller ‘Three Cups of Tea’ www.threecupsoftea.com which has sold over 4 million copies, been published in 47 countries, and a New York Times bestseller since its 2007 release, and Time Magazine Asia Book of The Year.Mortenson’s new book, Stones Into Schools: Promoting Peace with Books Not Bombs, In Afghanistan and Pakistan, was released by Viking on December 1st, 2009.

As of 2010, Mortenson has established over 145 schools in rural and often volatile regions of Pakistan and Afghanistan, which provide education to over 64,000 children, including 52,000 girls, where few education opportunities existed before.