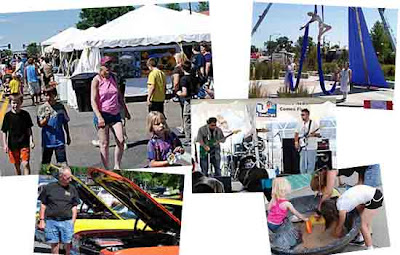 Casper NIC Fest
June 18-19, 2010
Amazing Arts!
Dozens of artists from across the country will be showcasing and selling their works – paintings, drawings, sculpture, photography, jewelry and more – in 2010.
In addition, the Nicolaysen Art Museum’s galleries will be open and free to the public throughout the festival.
Great Entertainment!
This year, NIC Fest’s Main Stage will feature 14 different musical groups performing throughout the weekend.
On Saturday, during breaks on the NIC Fest Main Stage, visitors can wander down to the corner of Beech and 2nd street to hear the unique African/Cuban drum sounds of Tanbores Afro-Cubano. This group from Colorado, led by Colorado University professor Thomas VanSchoick, plays traditional and contemporary rhythms from Africa and Cuba. Some of the styles that they will be playing are Rumba, Yambu, Guaguanco, Guarapachangueo, Rumba Columbia, Bembe, Guiro, Iyese and Bata Rumba. Some of the more interesting percussion instruments that group members will play include Conga, Bata, Cajons and Chekere drums. Other members of the group include Dave Crowder, Scott Mast, Eric Walker and Maurizo Capperelli.
In addition, the Wyoming Shakespeare Festival Company will kick off its 2010 summer tour of the state with a special performance at NIC Fest on Sunday.
Plus, NIC Fest also offers lots of other unique things to see and do, such as the annual Art on Wheels car show, chalk art competition and Kiwanis pancake breakfast.
NIC Fest is held primarily on the grounds of the Nicolaysen Art Museum & Discovery Center, 400 E. Collins; but also makes use of the City of Casper’s Historic Monument Plaza and Walkway (just north of the museum) and Gazebo (west side of Beech Street) as well as three surroundings streets – Beech, Kimball and Collins, which are closed for the event.
http://www.nicfest.org/index.html
Sort By Category By Month By Year
Cancel