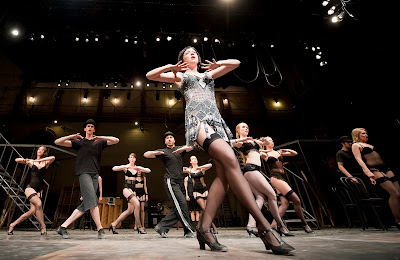 Broadway’s musical sensation “Chicago” will be the University of Wyoming Department of Theatre and Dance’s final performance this season. “Chicago” will run at 7:30 p.m. Tuesday, April 12 through Saturday, April 16 and at 2 p.m. Sunday, April 17, at the Fine Arts main stage.

Tickets cost $16 for general admission, $13 for senior citizens and $8 for students. Tickets are available at the Wyoming Union and Fine Arts box offices. For tickets and information call (307)766-6666 or go online at www.uwyo.edu/finearts

A send-up of the windy city’s gangster era, “Chicago” is a sensational tale of murder, corruption and celebrity, originally featuring Bob Fosse’s legendary choreography and show-stopping dance numbers including “All That Jazz,” “Razzle Dazzle” and “Cellblock Tango.”

Director Leigh Selting is pleased to secure the rights to produce the show.

“As a young actor, I was in a production of Chicago in 1981, after the original production had closed and I’ve always wanted to direct the piece myself. As the revival of Chicago is still playing on Broadway today, we’re quite fortunate to be able to produce the show,” Selting says. “I’d inquired after the performance rights for a number of years, and we were finally notified last spring that the University of Wyoming was granted permission to produce the show — one of very few universities in the country.  It’s rare to be able to present a show that is still playing on Broadway.”

He said the show is a wonderful challenge for UW musical theatre and dance students. Selting notes that the production presents a unique opportunity for theatre design and technology students to work in a non-realistic setting. “Chicago” makes use of plenty of steel fabrication and the costumes are iconic of the sexy and seductive time and place in Chicago that Fosse made famous in the revival production.

“People should not expect the movie version here, either,” Selting adds.  “We’re doing the stage version that has since become the longest-running Broadway revival in history.”

“Chicago” contains language and themes that some might find objectionable.

Photo: Noelia Antweiler leads the cast in the University of Wyoming Department of Theatre and Dance production of the Broadway musical sensation “Chicago.” (UW Photo)