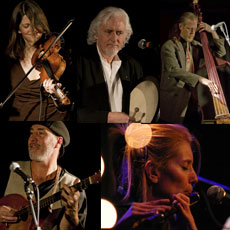 Jean Bolger began playing violin at age six: classical music was the ‘approved listening’ at home. A later convert to Irish ﬁddle, she brings great control to her ﬁery playing and a ﬁrm delicacy to her subtle, nuanced accompaniments. Jean is also a proliﬁc composer, and once undertook writing a new tune every day for a year.

Mick Bolger is becoming increasingly recognized as a leading interpreter of traditional Irish song. He sings in both English and his native Irish (Gaelic), bringing an emotional directness and surprising depth. He also plays the bodhrán and his stories and humor keep audiences intrigued. Mick originally moved to the U.S. to pursue a degree in sculpture.

Mike Fitzmaurice (guitar and acoustic bass) is another former visual artist, with a degree in painting. He has run the gamut from bluegrass band to blues band to ballet orchestra. Mike’s bass playing is unique in the traditional music scene, with the instrument stepping up as an equal voice in the melodic texture – the “bass ﬁddle”, as it were. A skilled composer, he has written two full-scale works for Colcannon and symphony orchestra, “The Red Kite” and “Lusanna”.

Cynthia Jaffe (Irish flute, alto flute and tin whistles) has performed on the Celtic music scene since 2002, especially in the Colorado-based trio “County Boulder.” A multi-instrumentalist with classical roots, she hails from New York and has lived in New England, Denmark, Amsterdam, India, where she studied classical Indian music (ﬂute and kanjira) at Wesleyan University’s World Music Program and with master teachers in Madras, India.

Brian Mullins (cittern, guitar, mandolin, flute) originally joined Colcannon as a guitarist and mandolin player in 1994. His inventive rhythmic accompaniments are a deﬁning aspect of the group’s sound. Over the years he has incorporated more and more of his instrumental skills into the band’s arrangements, playing mandocello, bouzouki, erhu (Chinese spike ﬁddle) and ﬂute. Brian is a proliﬁc composer.