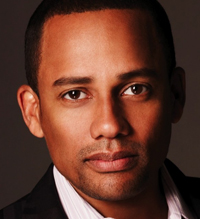 Film, television and stage actor Hill Harper is the keynote speaker for the 2012 Martin Luther King Jr./Days of Dialogue at the .
Best known for his current role as Dr. Sheldon Hawkes in the hit CBS drama series, “CSI: NY,” Hill will speak at 7 p.m. Thursday, Jan. 19, in the Arts and Sciences auditorium. His presentation is free and open to the public.
The theme for the 11th MLK/DOD, Jan. 16-20, is “Building Unity Through Community: Local to Global.”
UW community members honor the continuing impact of Dr. Martin Luther King Jr. and his life and ideals through this celebration. The week of activities renews UW’s commitment to making the campus and a more welcoming and empowering place for people from different backgrounds, heritages, orientations or abilities, say co-chairs Kate Steiner, UW interim assistant dean of students, and Aimee Glocke, African-American Diaspora Studies visiting assistant professor.
An honors graduate from and recipient of graduate degrees in both law and public administration from Harvard, Harper has appeared in many independent and international films and television programs.
In February 2005, Harper starred in the HBO movie “Lackawanna Blues,” which was based on the critically acclaimed stage play by Ruben Santiago-Hudson. The film, fueled by rhythm and blues, won the Image Award in 2006 for “Outstanding TV Movie” and the Emmy Award in 2005 for “Outstanding Casting in a Movie.”
As a television actor, Harper has had numerous guest-starring roles. He recently appeared on recurring episodes of Showtime’s “Soul Food” and appeared on HBO’s “The Sopranos.” He also starred in the CBS mini-series “Mama Flora’s Family” and the UPN Network comedy/drama “Live Shot.” Among other guest appearances were “ER,” “NYPD Blue,” “Murder One,” and “The Fresh Prince of Bel Air.”
Harper’s stage credits include appearances in off-Broadway productions of “Your Handsome Captain,” “Freeman,” and David Mamet’s “American .” He completed a starring run of Jessica Hagedorn’s “Dogeaters” at ‘s Joseph Papp Public Theatre. Harper is a full-time member of Boston Black Folk’s Theater Company, one of the nation’s oldest and most respected African-American traveling theater troupes.
He also has appeared in two Spike Lee movies “Get on the Bus” and “He Got Game,” and more recently “For Colored Girls.” Harper volunteers for organizations such as Big Brothers Big Sisters in and speaks to youth in public schools about the values of a good education. He was selected as one of People magazine’s “Sexiest Men Alive” (2004).
One of the main events of the annual MLD/DOD is the MLK march. Beginning at the Albany County Courthouse at 4 p.m. Monday, Jan. 16, participants will march to the Wyoming Union where the Willena Stanford Supper begins at 4:45 p.m. in the ballroom.
Most events are free and open to the public. Panel discussions, a photo exhibition, speakers and workshops are scheduled throughout the week. MLK/DOD concludes Friday, Jan. 20, with the Lupe Fiasco concert at 8:30 p.m. in the Arts and Sciences auditorium. Tickets can be purchased at the Wyoming Union information desk, the Fine Arts box office and online at www.uwyo.edu/finearts .
For a complete list of events, visit the MLK/DOD website at http://mlkdod.wordpress.com/ or follow updates on Facebook at https://www.facebook.com/events/317648238255013/ .
Photo: Film, television and stage actor Hill Harper is the keynote speaker for the 2012 Martin Luther King Jr./Days of Dialogue at the .
Sort By Category By Month By Year
Cancel