Detroit author and performance poet M.L. Liebler and L.A. musician Peter Lewis (shown in photo at right) one of the founding members of Moby Grape, will perform at the Historic Atlas Theatre in downtown Cheyenne on Saturday, Feb. 26. Showtime is 7:30 p.m. General admission tickets are $5, $3 for students, military and seniors (including over-the-hill hippies).

On Sunday, Feb. 27, Peter and M.L. will conduct a free public workshop at the Laramie County Public Library from 2-4 p.m.

On Monday, Feb. 28, M.L. will serve as one of three judges for the 2011 Wyoming Poetry Out Loud competition. The competition begins at 7 p.m. at the Atlas Theatre. Peter will perform a short performance during intermission. This event is free and open to the public.

These events are all sponsored by the Wyoming Arts Council, the Poetry Foundation and the National Endowment for the Arts.

Here is some bio info on M.L. and Peter:

One of our judges for the Poetry Out Loud event will be M.L. Liebler, a mover and shaker in the Detroit poetry scene. He has written several books of poetry including the 2001 Finalist for The Paterson Poetry Prize and was winner of The 2001 Wayne State University Board of Governors’ Award. He has read and worked with Ed Sanders, Diane di Prima, Michael McClure, Allen Ginsberg, Ken Kesey, Timothy Leary & William Burroughs.

In addition, Liebler has recorded his poetry with such musical legends as Al Kooper, Country Joe McDonald, Jorma Kaukonen, Mike Watt, The Magic Poetry Band and many others. Liebler also edited the recently released anthology, Working Words: Punching the Clock and Kicking Out the Jams, (Coffee House Press).

M.L. has worked with the Wyoming Arts Council before – as one of the judges for the FY 2002 creative writing fellowships and as a presenter at one of the last ARTSPEAK conferences, held in Jackson in the fall of 2001. As director of the Detroit YMCA Writer’s Voice, he came to Cheyenne in 2002-2003 at the request of the YMCA to conduct poetry and music presentations and workshops with Woodstock legend Country Joe MacDonald.

Peter Lewis is a founding member of the 1960s band Moby Grape. Their debut album was released in 1967, and it is still to this day one of the most revered rock albums of all times according to Rolling Stone magazine and other cultural critics. The band’s energetic and hyper-exciting combination of folk, blues, and country was a unique sound to rock & roll. It was a new kind of American roots music but the band’s career never took off the way it should have, due to personal tragedies. It took Peter Lewis a long time to shake off the troubled legacy of his band and begin to make his mark again with a stellar singer/songwriting recording career. Don’t miss out on the chance to see this living legend perform. 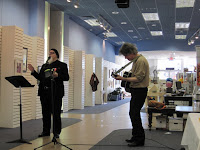 M.L. and Peter perform together (see photo at right). These two artists take their audience on a historical, cultural & literary journey from poetry to blues, folk and rock up to original contemporary compositions of both poetry and music. Together they blend words & music with beautiful harmonies, memories and the art of spoken word.