Dougherty sculpture to be installed at UW 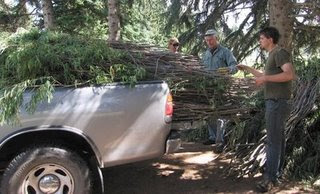 Artist Patrick Dougherty will spend the next three weeks in Laramie to create a large-scale sculpture made of saplings for “Sculpture: A Wyoming Invitational.”

The latest of 16 sculptures for the exhibition, Dougherty’s artwork will be installed on Prexy’s Pasture on the University of Wyoming campus.

This week, Dougherty began harvesting truckloads of saplings from Bath Ranch and Deerwood Ranch near Laramie. The saplings will be cut, sorted, bundled and transported by truck to UW. Within days, Dougherty’s structure will begin to emerge as he and dozens of assistants assemble the saplings into a unique work of art.

Dougherty has created nearly 200 site-specific sculptures in the United States, Canada, Mexico, Europe and Asia over the past 20 years. His work has been displayed at the National Museum of Natural History in Washington, D.C., the Museum of Glass in Tacoma, Wash., and the American Crafts Museum in New York City, among other places.

Dougherty comes to Wyoming following his most recent installations for the Garden of the Arts in France, and Sculpture in the Parklands in Ireland.

He has received many honors and awards, including the Pollack-Krasner Foundation Grant, Henry Moore Foundation Fellowship and several grants from the National Endowment for the Arts. Dougherty’s work has been the subject of more than 100 articles and reviews in publications including The New York Times and the Washington Post.

In addition to the installation of his sculpture, Dougherty will discuss his work at 7 p.m. Wednesday, July 23, at the Albany County Library, 310 S. 8th St. A reception follows.
“Sculpture: A Wyoming Invitational” is being organized by the UW Art Museum, various agencies in the City of Laramie and the Albany County Public Library. Sculptures will be placed or created on location through July. The exhibition will be on view from Aug. 1 through July 31, 2009.

“The exhibition will offer extraordinary educational opportunities for students of all ages to learn about the artists, their creative processes and the behind-the-scenes view of just how these large-scale works are created and placed,” says Susan Moldenhauer, director and chief curator for the UW Art Museum.

For more information on “Sculpture: A Wyoming Invitational,” go to the Web site at http://www.uwartmuseum.blogspot.com/.

IN THE PHOTO: Chief Preparator Sterling Smith, Artist Patrick Dougherty, and Museum Intern Jedediah Cracco deliver a truckload of saplings to Prexy’s Pasture for the installation of Dougherty’s sculpture. Photo courtesy of the UW Art Museum.