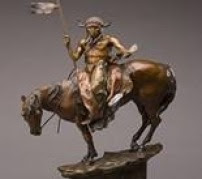 Dustin Payne represents the third generation of professional western sculptors in his family, so it comes as no surprise that the trade was a natural path for him. On his mother’s side he is a descendant of Hiram Daugherty and Mary Jane Goodnight, the sister of Texas Cattle King, Charlie Goodnight. Goodnight and Oliver Loving brought the first longhorns across country from Texas, inaugurating the cattle drive era. As a child, Dustin enjoyed the drawings and books of Will James and was heavily influenced by the historical nature of his father and grandfathers work. He enjoys researching the history of the subjects he creates and is greatly inspired by his family’s western roots. When not sculpting, Dustin enjoys team roping and loves to spend time outdoors on his family’s ranch.

Join us for a hands-on workshop with this award winning sculptor. Class size is limited to ensure personal instruction for all class participants.

Tuition for 2-day workshop is $120. This includes breaks and a barbecue.

To register or for more information, please call Charles at 307.459.4195. You can also request a registration form at charlesdayton@allwest.net.