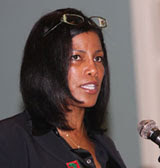 Ilyasah Shabazz, an author, lecturer and daughter of slain Muslim leader Malcolm X, is the keynote speaker at the eighth annual Martin Luther King Jr. and Days of Dialogue (MLK/DOD) celebration Jan. 18-22, 7:30 a.m., at the University of Wyoming Union Ballroom.
“Poverty, Politics and Race” is the theme of this year’s event. MLK/DOD renews UW’s commitment to making campus a more welcoming and empowering place for people from different backgrounds, heritages, orientations or abilities. UW events celebrate the continuing impact of Dr. Martin Luther King Jr.’s life and ideals.
Author of the book “Growing Up X,” Shabazz is committed to developing educational programs that foster self-empowerment; expanding the role of government to teach individual responsibility for improving society; and capitalizing on the arts and entertainment to encourage the understanding of history, culture and self expression.
She is the third daughter of Malcolm X, an African-American Muslim minister, public speaker and human rights activist. To his admirers, he was a courageous advocate for the rights of African Americans, but his detractors accused him of preaching racism, black supremacy and violence. Malcolm X has been described as one of the greatest and most influential African Americans in history. Shabazz was only 2 years old and present when her father was assassinated in 1965 in New York.
Shabazz produces “The WAKE-UP Tour,” her exclusive youth empowerment program designed to inspire young people to think and act critically to safeguard their futures. She also is corporation president and trustee of her parents’ legacy, The Malcolm X and Dr. Betty Shabazz Memorial, Educational and Cultural Center, Inc. at The Audubon, the place of her father’s assassination.

Among other highlights of MLK/DOD are the annual MLK March and Willena Stanford Supper; panel and book discussions, observation of National Service Day, movies, art reception and entertainment.


For a full list of activities, visit the MLK/DOD Web site at http://www.mlkdod.com/mlk2010/or contact Kate Steiner at (307) 766-6790 or e-mail ksteiner@uwyo.edu.
Sort By Category By Month By Year
Cancel