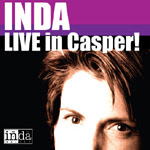 Recorded live in Casper in May during her performance at Kelly Walsh Auditorium, “Inda-Live in Casper,” is being relesed exclusively to Casper residents and Inda fans. Featuring her band and special guests and Casper performers Cory McDaniel and Todd Scott, the album was produced with Grammy award winning engineer Cynthia Daniels in New York. Inda’s planning a tour to support the album in the spring and summer.

The CD is available to preoreder now on Inda Eaton’s website at http://www.indaeaton.com/ Preorders will ship Tuesday, December 11. Apart from online orders, the CD will be sold exclusively at Sonic Rainbow (307) 577-5947, 140 S. Center St., starting December, 15. Cost of the CD is $15.
Sort By Category By Month By Year
Cancel