Inda Eaton returns to Casper May 7 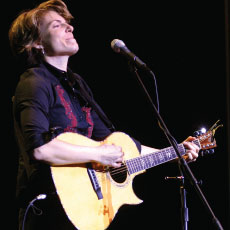 Inda and her band have opened for names such as Hootie and the Blowfish, LeAnn Rimes, Smashmouth, and John Hiatt.

Performing original work and featuring guests from the and neighborhoods, she will debut music from the upcoming, sixth independent album.

“… Inda Eaton, a uniquely talented singer/songwriter who played to a full house. Eaton writes songs that are a little Indigo Girls, a little Springsteen, but largely-her. I was struck by how accessible the tunes were without being trite or simplistic. These were perfectly structured songs with good lyrics that led the first-time listener easily from section to section. Eaton’s vocals and stage presence are confident and highly likable.” –TalkHouse