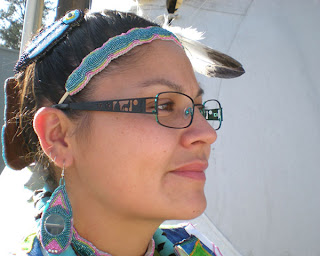 From a story in the Oct. 13 edition of Indian Country Today by Jack McNeel:

SPOKANE, Wash. – Wearable art is nothing new. We wear all forms of jewelry and clothing inspired by Native artists, but something new is available and designed particularly with Native Americans in mind. Eyeglass frames with designs created by Smoker Marchand, a member of the Colville Confederated Tribes, Arrow Lakes Band, are the latest in wearable art.

The company producing these frames is Encore Vision, Inc. located in Spokane, Wash. It’s not a Native-owned company but General Manager Teri Harris said their focus will be the Native American niche and she plans to expand their offerings to include designs from Indian artists throughout the country, thus providing a wide variety of styles and designs. Marchand is the first artist to be signed and was told at the time that others would follow.

“They told me from the get-go that they’re looking for different Indian artists from different areas. They’d like to incorporate that and I said that’s no problem.”

Read the rest of the story here.