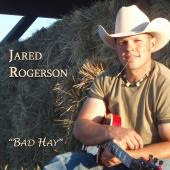 Wyomingarts just heard a fine new song, “Straight for the Storm,” by Jared Rogerson of Pinedale on KUWR’s “Morning Music.”

Jared’s CD “Bad Hay” will be released Friday, Feb. 26. He will conduct an acoustic performance at the Wind River Brewing Company in Pinedale on Saturday, Feb. 27, to celebrate the CD release. Music starts at 8 p.m.

Here’s some bio info from the musician’s MySpace page at http://www.myspace.com/jaredrogerson:

Jared Rogerson’s music stems from his love of riding bucking broncs and exploring the great outdoors. Ironically, it was a rodeo injury in 2007 that spurred Jared into taking his music more seriously. “I’ve always wanted to make music. I remember pulling myself up off the arena dirt and thinking, it’s time.” In 2008, Jared recorded his first single, ‘Boomtown’, which received airtime on Wyoming Public Radio; he also performed it on international television. His first full-length CD, ‘Bad Hay’, features songs like ‘Glad I Took This Ride’, ‘What a Way to Go’, and ‘Above the Timberline’ reminiscent of John Denver’s ‘Rocky Mountain High’, bringing us to reflect upon our deepest roots. “We all have experiences from time to time that put the big picture back in perspective. That happens to me every time I get on a horse and ride into the mountains- I love it!”

Jared’s debut release also includes tunes like ‘Ridin’ Wild Ponies’ and ‘I Can Fly’ that rely on his experience traveling the rodeo circuit. Jared had his first “rodeo wreck” at the age of 3 that left him with a broken arm. “My dad pretended to be the bull and I was the cowboy, I just couldn’t get him covered.” Years later, Jared competed on the high school rodeo team and went on to earn a Bachelor’s degree with the support of an academic and a rodeo scholarship riding bareback broncs. Afterward he competed at a professional level and continued his rodeo career while earning a Master’s degree in Biology.

While on the rodeo circuit, Jared packed his guitar and wrote songs to pass the time. “I’ve written and sang songs ever since I was a little kid, I just didn’t write them down on paper. After a while I’d forget ’em, then I’d make up new ones.” Jared is now writing and recording songs with all the energy he put into rodeo by means of a certain ‘I can do it’ attitude he picked up along the way. “If I had to pick one singer/songwriter that has influenced my life the most, it would be Chris LeDoux. His music inspired me at a young age to dare to live my dreams. I try hard to make decisions based on the positive adventures I see connected with them. That’s where my music comes from.”