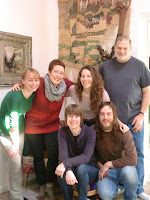 From a Jentel Foundation press release:
Jentel Artist Residency Program is pleased to present this month’s residents in an event open to the public.
“Jentel Presents” will take place Tuesday, February 7, 2012 from 5:30 to 7:00 pm at SAGE Space, in the Historic Train Depot on 5th and Broadway, across from The Sheridan Inn. This month’s presenters include a mixed media artist, an oil painter, a fiction writer, a watercolorist, a novelist and a mixed media artist. “Jentel Presents” is a community outreach program that features visual presentations and readings by the visual artists and writers at the residency.
Presenters include:

Renee Adams, , ; A mixed media artist, Renee is an artist member of PUNCH Gallery in . Making her home in the bucolic hamlet of Thorp, she creates mixed media sculptures influenced by her enduring interest in flora and fauna, her travels to distant lands (like the Galapagos and Antarctica), and the roughly 60,000 honeybees that live in her backyard.

Malcolm Christhilf, Springboro, PA; An oil painter, Malcolm has worked as a mate on a skip-jack, an arborist, a landscaper, a janitor, a clammer and a candlestick maker, but he has always been a painter of pictures.

Kathleen Connor, ; A fiction writer and avid Facebook enthusiast, she’s always thinking about her next status update. Popular topics include teaching English in , dancing to Justin Timberlake with her dog, Mandu and writing fiction in gorgeous .

Justin Gibbens, Thorp, WA; Working in watercolor and ink, Justin is a master draftsman, trained in both scientific illustration and traditional Chinese painting; a skill set that he employs in his subversive zoological drawings. He has worked in the Antarctic, studied in and visited the . Justin has shown nationally and internationally.

Ilana Sichel, Ann Arbor, MI; A novelist, Ilana has lived in D.C., Boston, NYC, and Jerusalem, Ilana Sichel currently lives in Michigan, where she is writing a novel that begins in 1930s Jerusalem.

Liz Tran, Seattle, WA; A mixed media artist whose first job was in her father’s wooden drift boat building business and strangely enough, the progression from boat builder to artist felt quite natural.

For anyone looking for a stimulating evening, comoin the crowd at the SAGE Space, at the Historic Train Depot, 5th and Broadway.  There is no admission charge for “Jentel Presents” and refreshments are available.
The Jentel Foundation offers dedicated individuals a supportive environment in which to further their creative development. While at Jentel, visual artists and writers have the opportunity to experience unfettered time to allow for thoughtful reflection and meditation on the creative process in a setting that preserves the agricultural and historical integrity of the land.
The Jentel Artist Residency Program accepts applications twice a year from visual artists in all media and writers in all genres for a one-month residency. A residency includes a comfortable accommodation; common living, dining and recreation areas; a private workspace and a stipend to help defray expenses during the program.  For more information please visit http://www.jentelarts.org/ or call Jentel at (307)737-2311.
Sort By Category By Month By Year
Cancel