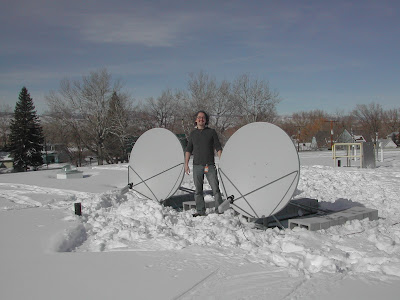 New York’s Metropolitan Opera comes to Lander this month by HD satellite television, thanks to the efforts of local opera fans calling themselves Lander Met Opera and staffers at the Fremont County Library. Lander and Jackson are now the only two locations in to receive these broadcasts. The first performance will be Gluck’s masterpiece “Iphigénie en Tauride” featuring acclaimed tenor Placido Domingo, broadcast beginning at 10:30AM, February 26, 2011, with curtain-up at 11AM.  Five more operas will be presented this season: March 19, Lucia di Lammermoor (Donizetti); April 9, Le Comte Ory (Rossini); April 23, Capriccio (R Strauss); April 30, Il Trovatore (Verdi); May 21, Die Walküre (Wagner). Because the Metropolitan Opera requires that each attendee pay a fee of $10 per performance, single tickets will be offered for a $10 donation, the entire amount going to the Metropolitan Opera. Lander Met Opera will also accept additional donations to help cover its own printing costs and other expenses.

Performances will be shown on a large screen in the Library’s second floor conference room until the remodeling of the Carnegie Room is completed. Lunch on the day of each performance can be pre-ordered before the performance begins at 11 AM, from the Breadboard and enjoyed during intermission (usually 30 minutes). Tickets and more information will be available shortly at Main Street Books, Cabin Fever Books and at the Library.

If you wish to receive e-mail reminders for the broadcasts, contact Marvin Brown at marvjobrown@wyoming.com. Include your name, address, phone number, and email address.