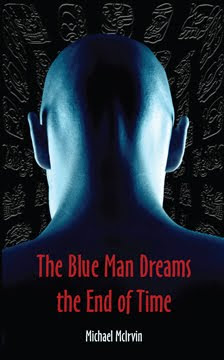 Michael McIrvin of Cheyenne has a new book, “The Blue Man Dreams of the End of Time.”

Here’s a description of the book from Michael’s publisher, BeWrite Books:

Sonny, a drunken convenience store clerk living uneasily in a relationship with twin sisters, woke up naked and blue. Not sad, but actually blue from head to toe.

A warped warning from a former CIA colleague? A message from a deranged hit man that he and those he loves are marked for death? Or is his blueness a more invidious omen?

Sonny’s search for answers will lead him to a perverse reconciliation with his former bloody role in geopolitics – and his destiny – on the bloody trail to Chiapas.

Along the way he will befriend a people struggling to survive, reconsider the nature of terrorism and the drug trade, and decipher an ancient Mayan vision of the end of time.

He will also meet another former CIA operative who doubles as a jaguar shaman, a Mayan holy man whose prophesies include Sonny, and a mysterious boy whose role in his people’s future is both mythic and deadly.

Sonny’s flashbacks to his gore-stained government work in Mesoamerica, including the act for which he was ‘excommunicated’, constitute proof of power’s inhumanity, but his darkest revelation is that violence and greed are the true mechanisms of history.

Michael McIrvin’s high-octane, intelligent novel is an immaculately researched, powerful indictment of brutal counterintelligence, including torture and murder, an exploration of how ends are achieved by a nation-state. This book is frighteningly timely.