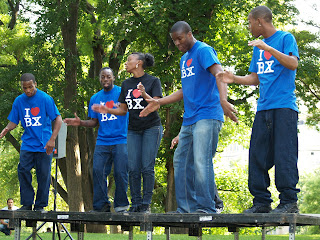 From a UW press release:
In celebration of the Martin Luther King Jr. Days of Dialogue, the P.L.A.Y.E.R.S. Club steppers will perform a free show at 8 p.m. Wednesday, Jan. 18, in the University of Wyoming College of Arts and Sciences auditorium.
Meaning “Participating in the Lives Among Youth to Educate and Restore Society,” the P.L.A.Y.E.R.S. Club Steppers (PCS) perform shows using dance as inspiration. Having begun in 1996 in the Bronx, the P.L.A.Y.E.R.S. Club steppers perform to entertain but also to educate. Much of their dancing originates from slavery; when slaves were unable to speak while working they would use stepping to communicate with each other.
“We discussed quite a few different options for this year’s SAC event during MLK Days of Dialogue, and wanted to have some sort of performance, whether that would mean music, dance, or some other more artistically focused presentation,” says Stephanie Long, SAC graduate assistant. “We wanted to offer a performance that still kept with the theme of the week, but offered a chance for the university community to take a breath from the heavy and important subject matter and just have some fun.”
Not only have the P.L.A.Y.E.R.S. Club steppers performed in the White House, they have also gone on tour with popular musicians such as Alicia Keys, Usher and Ja Rule and have even been cast in the movie “Stomp the Yard.” They also perform at colleges and universities.
For more information about the P.L.A.Y.E.R.S. Club steppers, visithttp://www.gernyc.com/theplayersclubsteppers.html .
The show is sponsored by the Student Activities Council and Friday Night Fever. Individuals needing assistance to attend this event should call (307) 766-6340. For more information, visit www.uwyo.edu/sac .
Photo: The P.L.A.Y.E.R.S. Club steppers will perform a free show at 8 p.m. Wednesday, Jan. 18, in the Arts and Sciences auditorium.
Sort By Category By Month By Year
Cancel