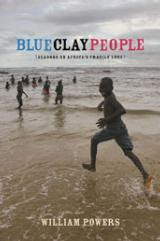 If your body’s fine, you’re fine. That’s the view of Liberians, anyway, who greet each other in this way.

William Rogers remembered this when he returned to Liberia earlier this year after a ten-year absence. He wasn’t so good about duplicating the country’s traditional “snap-shake.” As he described it in a July 19 Washington Post column:

After a regular handclasp, each person uses the other’s middle finger to snap his own. The result is a satisfying double pop. But I’d been out of Liberia too long. My snap-shake wouldn’t snap. “Keep tryin’,” he [an immigration official] said.

Bill Powers now lives in New York City and is one of the presenters at the Casper College Literary Conference that continues through Saturday. He’s published two books and has a third on the way. His first book, “Blue Clay People: Seasons on Africa’s Fragile Edge,” chronicled his two years working for Catholic Relief Services during Liberia’s civil war. Charles Taylor became infamous instigating and then perpetuating the war that went on for 14 years.

Bill presented images from Liberia at his literary conference talk Thursday evening. One showed the view from his CRS office. Young Liberians fired automatic weapons at an unseen enemy holed up in a bombed out cityscape. Death and torture were endemic. Bill told this grisly true story from the war. Taylor’s soldiers cut open a man’s belly and pulled out his intestines. The soldiers stretched the intestines across a road and gave the end to his daughter to hold. She was warned not to drop it. If she did, she would be killed. Her father yelled at her not to drop it. She held on as her father died.

Amongst the mayhem, Bill discovered “an unbelievable joy and lightheartedness — joy in being alive.” He reminded the audience that there’s more to any story than what’s happening on the surface. To illustrate, he showed photos of young boys surfing Liberian waves and [people clapping in church. Some kids were being killed — and some child soldiers were doing the killing. But some kids were playing ball and having fun.

Bill said that he filled up lots of journals while in Liberia. He didn’t try to fashion those into a book until he was reassigned to La Paz, Bolivia. He submitted the manuscript to a hotshot book doctor in NYC and she didn’t like it. Bill let the manuscript sit for awhile and then tried some small literary presses. Three of them responded favorably and one — Chicago Review Press — even made an offer.

But someone told him to get an agent. He did. The agent offered the book at auction. To his surprise, Bill received a huge advance and quit the world of international relief to write full-time.

But those two things have a lot in common.

“Writing and action can help make real change,” he said. He outlined “three lessons he learned by living abroad: trust your own truth; we live in one world now; and ideas can change the world.”

All of these could apply to any artistic discipline, writing especially.

“Words are worms that can burrow into people’s minds and change them,” he said.

While we were mulling over that imagery, he told the story of his second book, “Whispering in the Giant’s Ear: A Frontline Chronicle from Bolivia’s War on Globalization.” Bolivia’s glaciers were disappearing as quickly as its bountiful rain forests. “There is no skiing in Bolivia any more,” he said, noting that the country’s glaciers have retreated away from the skiing areas.

But the rain forests are being saved. Preservationists bought out five companies which were logging the forests, creating a huge preserve that butts up against another one across the border in Brazil. Indigenous tribes were able to reclaim land for a reservation on the western side of the new Bolivian preserve. Not every battle ended in success, but progress was being made through this idea of “carbon ranching.”

When Bill’s book came out, Bill thought he’d been fair to the international conglomerates who’d gone from despoiling Bolivian land to assisting in its preservation.

Not so. They complained about the book and the publisher pulled the book for six months. This is a terrible thing to happen to a new book. Bookstores give it only a few months to sell and then its off the shelves for something new.

The book is available again. But Bill received some schooling on the dynamism of raw power.

Bill will be at the conference through Saturday. You can buy his books at this evening’s presentation by Tim Sandlin and Linda Hasselstrom at 7:30 p.m. at Durham Hall.