Ski by day, watch wildlife films by night during December in Jackson Hole 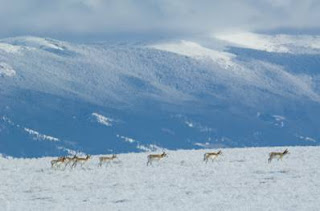 Four films screening at the National Museum of Wildlife Art in December will explore environmental challenges facing a variety of species as part of the museum’s returning “Art After Hours” series.

Art After Hours is offered Tuesday nights from 5-9 p.m. throughout the winter, combining intriguing programming — like the December 28 premiere of Out of Yellowstone — with a chance to explore the museum’s galleries, all for free. Visitors also can enjoy a tapas dinner before or after the film in the Rising Sage Café; reservations for this option are recommended by calling 307.732.5434.

December films, presented at 7:30 p.m., are scheduled as follows:

Art After Hours is sponsored by the Dragicevich Foundation and Dr. Christine Laughery/Home Health for Pets. Check the museum web site for information on weekly programming.

A complete schedule of exhibitions and events is available online at http://www.wildlifeart.org/. The museum is also active on Facebook at wildlifeartjh and on Twitter at @wildlifeartjh