Snoopy has landed at the Wyoming State Musuem 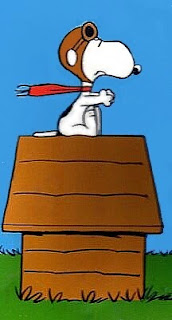 Snoopy, Charles M. Schulz’s lovable beagle, flies in for a visit as the Wyoming State Museum hosts, “Snoopy as the World War I Flying Ace,” an exhibit on display from October 22 through November 20.

The exhibit showcases 40 of Snoopy’s most exciting adventures in his transformed doghouse – now a Sopwith Camel airplane – from the time he faced a deadly bout of influenza to sparring with his archenemy, the Red Baron. The exhibit also includes assorted Snoopy objects, toys and books.

“Snoopy as the World War I Flying Ace,” is toured by ExhibitsUSA, the national touring division of Mid-America Arts Alliance, a non-profit regional arts organization based in Kansas City, Mo.

Schulz served as a sergeant in the army and had always wanted to draw adventure comic strips, but was told to stick with what he did best – funny kids. However, after 15 years as a cartoonist, on October 10, 1965, he finally had the opportunity to create his hero, Snoopy, the World War I Flying Ace.

Visitors to this exhibit can follow Snoopy on his imaginary adventures through the skies of Europe. Forty digital prints from the original drawings, done by Schulz, are on display, along with accompanying photographs of the artist.

The Wyoming State Museum is located in the Barrett Building, 2301 Central Avenue in Cheyenne. For more information, please call 777-6670.