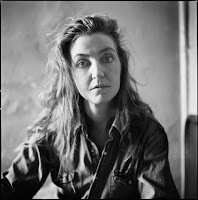 Author Rebecca Solnit will be at the University of Wyoming for a month long teaching residency. The MFA in Creative Writing program hosted a luncheon/talk with Rebecca today. Jeff Lockwood began the dialogue by holding up a map of his journey throught the UW library in locating Rebecca’s books, which were on five floors, the only they were not on was the administrative services–access denied floor. His first question–do you know of any other authors who have books in five different areas of a library brought a resounding second question–is there a grand plan to your [Rebecca’s] writing, and if there is, how important is that plan?

“One thing leads to another. It’s a very organic process,” Rebecca answered, but there was much more to her answer than I could hope to write down with my simple pencil on my simple mini legal pad. She takes many aspects of place into consideration. Researching a book, she began to walk everywhere; but it was much later that she considered writing about the actual walking as part of the story, or as another story completely, when she realized the different–weird, subversive and multi-dimensional–cultures she encountered while she walked.

One student asked her about the communities that are formed by online connections. Does place have to be physical? She said, “You have to be able to use what’s before you effectively. It can be used detrimentally.” She made an interesting observation. The revolt in Burma was organized and reported about on Facebook. She said, “Facebook is good for revolutions.” But the face to face doesn’t take place online–no one chats on ebay, yet there is face to face interaction at, say, the farmer’s market. She expects a backlash away from the online community at some point.

We all experience place and space in different ways. One questioner asked how important is place, or placelessness, for that matter, in her writing. Assumptions are different about the sense of space and place. Place does matter and we carry that with us wherever we go. She talked about New Yorkers and how they think their experience is universal, but for most people, their experience is very specific. It is probably the most pedestrian place in the U.S. She said growing up in the West felt colonial to her. Culture and history came from the east and the west was thought of as a colonial nowhere.

I don’t communte to Laramie for classes anymore, and so I noticed a few of the changes to the landscape on today’s drive. There’s now a billboard that wasn’t there last year. It reads, “It’s only 1,759 miles to New York City.” Now there’s a concept.

A short bio on Rebecca:

Rebecca Solnit is the author of thirteen books, including 2010’s Infinite City: A San Francisco Atlas; 2007’s Storming the Gates of Paradise: Landscapes for Politics; 2005’s A Field Guide to Getting Lost; 2004’s Hope in the Dark: Untold Histories, Wild Possibilities; and 2003’s River of Shadows: Eadweard Muybridge and the Technological Wild West, which won a Guggenheim in its research phase and several awards, including the National Book Critics Circle Award in Criticism after publication. An activist and a longtime San Franciscan, she writes about landscape, cities, and other geographies, the environment, politics, and visual culture. A contributing editor to Harper’s, columnist for Orion, and frequent contributor Tomdispatch.com, she is also a recipient of the Lannan Literary Award.