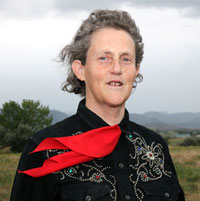 A renowned designer of livestock handling facilities and whose life story of overcoming autism is profiled in an Emmy-award winning HBO movie will give two presentations at the University of Wyoming in February.

Professor Temple Grandin of Colorado State University will present “The Field of Animal Sciences” from 2:10-3 p.m. Monday, Feb. 28, in the College of Arts and Sciences auditorium. Her talk will focus mainly on animals and livestock handling and the innovations she has made in the area of humane livestock handling.

At 3:30 p.m., she will discuss “Animals, Autism, and Sensory-Based Thinking.” A question-and-answer session, reception and a book signing will follow.

Her appearance is sponsored by Wyoming AgrAbility, a UW Cooperative Extension Service program, with support from the College of Agriculture and Natural Resources and the Wyoming INstitute for Disabilities in the College of Health Sciences.

“Bringing Grandin to UW will help share and spread the importance of her work,” says Kelley Dees, Wyoming AgrAbility project coordinator. “Her livestock handling innovations have revolutionized the way cattle are handled in the United States and in countries abroad. Her animal handling practices not only provide better meat quality, but, when done correctly, prevent the animal from feeling any pain.”

Grandin was featured in the 2010 film “Temple Grandin,” which received seven Emmys. The film won further notoriety Sunday, Jan. 30, when Claire Danes, who portrayed Grandin in the movie, won the Screen Actors Guild Award for outstanding performance by a female actor in a TV movie or miniseries.

“The obstacles that Grandin has overcome in her life are simply inspiring,” says Dees. “I am pleased to have the opportunity to work with such a brilliant woman who is a hero to so many.”

Grandin has designed livestock facilities in the United States, Canada, Europe, Mexico, Australia, New Zealand and other countries, and she speaks around the world on autism and cattle handling. She has consulted for such firms as Burger King and McDonald’s.

Call UW Paratransit Services at (307) 766-6686 to request complimentary disability transportation to the event.

Wyoming AgrAbility provides education, networking and assistance to ranchers, farmers and agricultural workers with disabilities and their families. Information is available at www.uwyo.edu/agrability/ or by contacting Dees at AgrAbility@uwyo.edu or (307) 766-3052 or toll-free at (866) 395-4986.