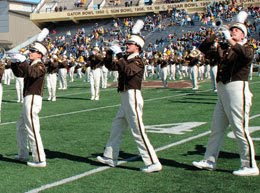 They performed at the Sun Bowl in 1958, and later entertained the crowds at the Sugar, Fiesta, Holiday, Copper and Las Vegas bowls.
The University of Wyoming Western Thunder Marching Band (formerly known as the Cowboy Marching Band) will continue the tradition when it leads the crowd in the popular “Ragtime Cowboy Joe” and other songs during the Dec. 19 New Mexico Bowl in Albuquerque, N.M.
The 153-member band, led by Director Brad Williamson, will rehearse Wednesday in UW’s indoor practice facility, before heading to Albuquerque the next day.
“It’s nice to reward them with this opportunity after they’ve worked so hard this semester,” says Williamson. “We appreciate the athletic department’s efforts to make this happen.”
Western Thunder features musicians from nearly every major on campus. They started the season the week before classes began in the fall. Students learned drills and practiced music for the season, and learned about the band’s pride, spirit, and tradition.
During the school year, practices are held during class hours and on game days. The band plays at every home football game and travels with the football teams on some road trips.
Sort By Category By Month By Year
Cancel