Writing in the Cracks — WyoPoets annual workshop in Casper April 23, 2011

Join WyoPoets 2011 workshop facilitator Lee Ann Roripaugh for “Writing in the Cracks/Hybrid-Genre Poetry” on April 23, 2011 at the Hilton Garden Inn in Casper.

Early registration is $40. After April 5, $45. A deli lunch buffet is included. The first 8 poems received are eligible for a critique by Ms. Roripaugh.

Rooms are available at the Hampton Inn, which is next door to the Hilton Garden Inn, for the special rate of $84/night, double beds. Please ask for the WyoPoets room block. Hampton provides a continental breakfast. 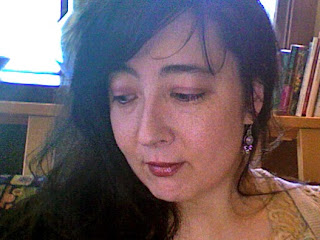 Lee Ann Roripaugh was was born and raised in Laramie, Wyoming. Her degrees include an M.M. in music history, a B.M. in piano performance, and an M.F.A. in creative writing, all from Indiana University. Her first volume of poetry, Beyond Heart Mountain (Penguin Books, 1999), was selected by Ishmael Reed for the National Poetry Series and was also a finalist for the 2000 Asian American Literature Awards. Other honors include an Academy of American Poets Prize, an AWP Intro Award, and the 1995 Randall Jarrell International Poetry Prize. Her poetry has appeared in numerous journals and anthologies, including Black Warrior Review, Cream City Review, Crab Orchard Review, New England Review, Parnassus: Poetry in Review, Phoebe, and Seneca Review. Her poetry has also been selected for inclusion in the anthologies American Identities: Contemporary Multicultural Voices (eds. Robert Pack and Jay Parini, 1994), American Poetry: The Next Generation (eds. Gerald Costanzo and Jim Daniels, 2000), and Waltzing on Water: Poetry by Women (eds. Norma Fox Mazer and Marjorie Lewis, 1989). Ms. Roripaugh is an Assistant Professor of English at the University of South Dakota.
Blog: http://octopusgardenhome.blogspot.com/